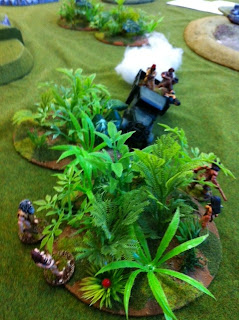 Shortround puts his foot to the floor and surprises some primitives by driving straight in their patch of jungle. By some miracle he makes it through but the truck will take 6 turns to repair. Turns out to be a job for Doctor Jones Senior. 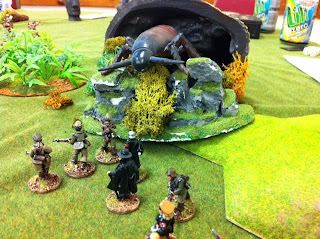 On the other side of the table Von Skarr's expedition are surprised by a nasty bug. And I do not refer to food poisoning.

Wu-Hu's men are ambushed by the primitives. In the far distance a couple of captives. Special rule for Wu-Hu who can choose to have a captive summarily executed to "encourage" his men in case of failed GUTS tests. 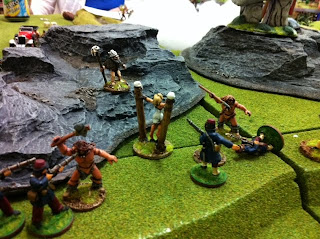 The French are depleted from a number of ambushes, but bravely make their way to top of the mountain. The lovely Mireille struggles to free herself whilst her captors are fighting the Legionnaires, whose Brutal Sergeant falls to well placed spear thrust (Zut Alors!). The primitive shaman, meanwhile strikes the mountain with his staff with much jibber-jabbering. 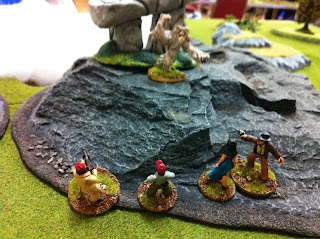 Indy and the gang approach the cave entrance. The shaman has summoned the Old Man of the Mountain - a fearsome Yeti. They hear the engine of their jaloppy start up below.
Posted by Matt Slade at 12:00