Open Combat takes off at the Forest of Dean Gamers club tonight. This is my board where my fine bunch of fellows took on Ralph's ne'er do wells. 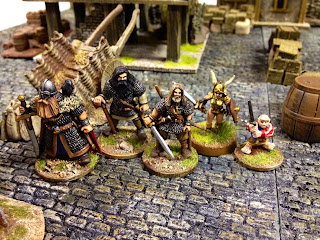 My heroes from l to r. Ragnar Ravenclaw (leader), Gur Longshanks, Erik Sure Eye, Brunhilde and Randall Cheesy-Nob (so named after his famed bread and cheese confection!). 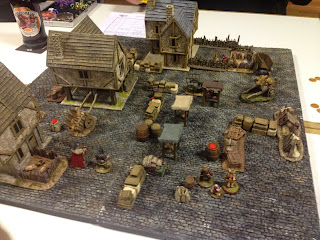 The sleepy hamlet doesn't know what's about to hit it. We played the treasure hunt scenario. The red markers being searchable places of interest. My chaps are advancing from the near edge. 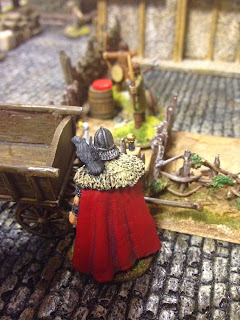 I've paid points for javelins to represent attacks by Ragnars trusty pet raven. Here it is used to great effect against a lowly archer. 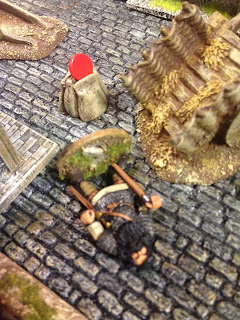 Ralph's party has already located two of the three treasure tokens so it all looks a bit desperate for my lot. The situation is not helped when the strong but not so bright Gur finds the catastrophe marker and has a bucket of slops dropped on his head knocking him out cold. 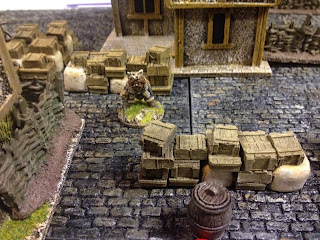 One of Ralph's skulking fellows gloats as his leader wanders off casually with the loot (some gave cruelly suggested that it looks like he's giving a dog a piggy back!). 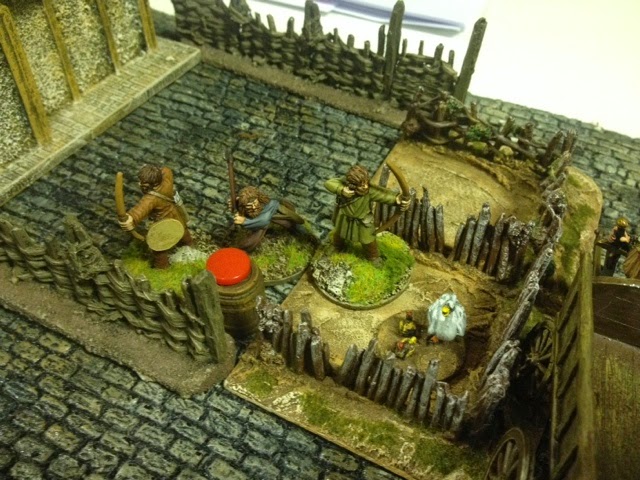 Ralph's archers secure another location while the barrel is searched. Brunhilde found the third treasure and the game was brought swiftly to a close with Ragnars gang leaving with their tails between their legs.
A second game was played and normal order was restored with Cheesy intimidating the opposition to mindlessness with his witty repartee enabling my fighters to finish them off.