More Lord of the Rings with Lion Rampant 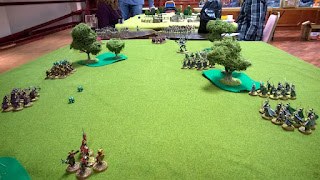 Another evening of Lion Rampant at the Forest of Dean Gamers club. Four new players introduced to the delights of Dan Mersey's excellent rule set.

Pictured is the game between Jack and Martin using my Easterlings/Haradrim and Wood Elves respectively. 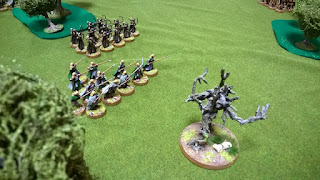 We played the bloodbath scenario which is straight forward for new players. The wood elves dominated the early turns, while their opponents struggled to get their movement going. 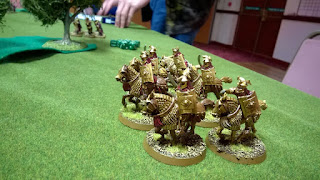 The Easterling cavalry although drilled, became prone to wild charges due to rolling a Rash leader trait. Jack managed to keep them in good order early on. 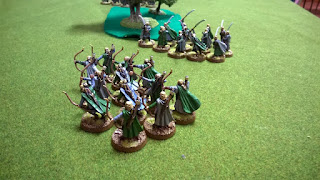 The wood elves swarm across the table. 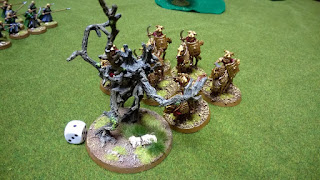 Jack softens up the tree man with a cheeky wound inflicted by his Haradrim yeomen and follows it up in the next turn with a crushing wild charge by his cataphracts. 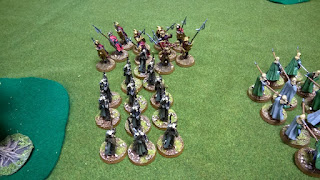 The Easterling infantry crash unsuccessfully into one of the archer units which once warmed up started to deliver some punishing volleys which eventually accounted for the cataphracts too. 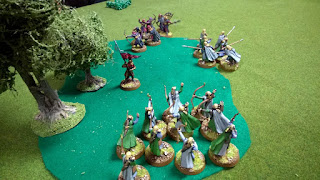 Morale starts to take its toll and although weakened, the wood elves keep their archers intact, eventually cornering the remaining enemy units in a wood.

A solid victory for Martin and the wood elves.

On the neighbouring table Ralph ran another game featuring my Rivendell Elves and his Orcs. Another win for the Sylvan folk, I'm pleased to report!