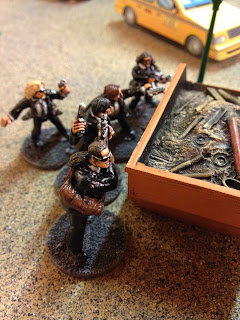 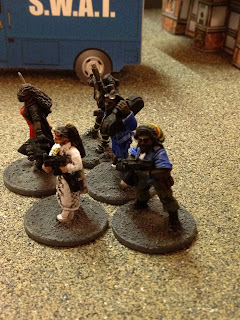 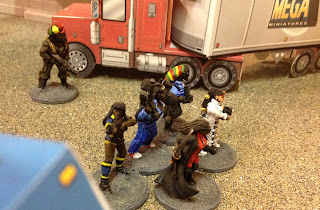 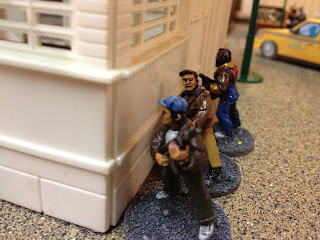 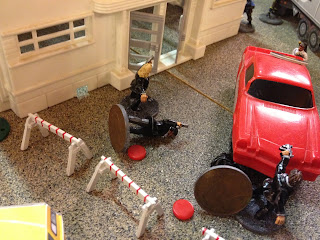 Introduced a couple of chaps to the Song Of club at Gloucester last week.

Went for a street violence type setting with 4 gangs fighting over the goodies from the Mayors helicopter which had been shot down. The crash proof containers were represented by 6 numbered counters. At the end of the game each counter was worth 5 points. We rolled a d6 and that counter was worth 10 as it was the Mayor's favourite Christmas pudding.

As is often the case the newbies slaughtered the more experienced players!
Posted by Matt Slade at 11:48 4 comments:

I'll be attending the Crusade show at Penarth with my Glenbrook Games stand.

It's a good show with free parking and a good variety of traders and games. I went for the first time as a punter in 2012 as its only an hour or so from my Forest of Dean hideout.

Links to the Penarth host club and the show below.

Hope to see some of you there. 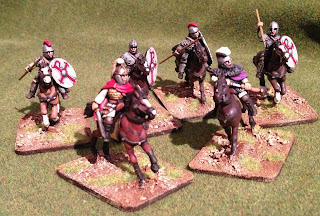 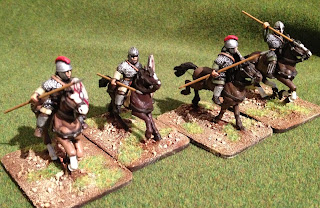 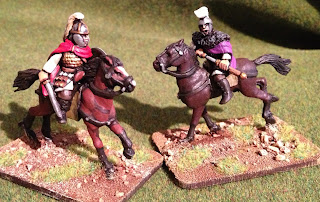 "Rescue from the Schwarzherz Wald" - A Fear and Faith scenario 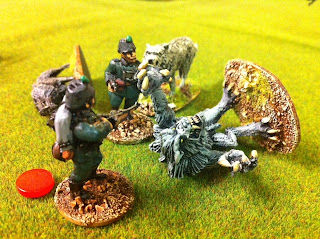 "Rescue from the Schwarzherz Wald"

Captain Jochen Frederickson and his company are patrolling the area of Freistadt in the south of Brunswick. His young Lieutenant, Anders Holtzmann has insisted on bringing his fiancée Alicia Grossenbuste along with him much against the Captain's wishes. Fraulein Grossenbuste is a niece of the Prince of Brunswick however which left him no choice but to put up with her unwanted, if charmingly curvaceous presence.

As evening falls, the company billet at the Alte Strudel Inn in the hamlet of Freidorf. The Captain and Lt are dressing for dinner when there is a scream from Alicia's room. The two officers burst through the locked door to find the window open and Alicia gone. Caught on the window sill is a scrap of Alicia's dress and a small amount of blood. Disappearing into the forest they see a large male figure with Alicia thrown over his shoulder.

The officers rush downstairs to be met with utter silence from the locals in the bar. The Lt grabs the nearest by his collar and demands to know who has taken his fiancee. The man, whimpering, explains that the village has been plagued by a troop of gypsy performers who live in the Schwarzherz Wald. He says they have been trying to lure their prettiest girls away.

A hooded figure in the corner of the bar rises and approaches the soldiers. He is Hans, a local hunter, who offers to accompany them into the forest as a guide.

Frederickson accepts the offer and the Lt is sent to rouse the men who are dozing in the stable.

The Company set off into the dense woodland led by Hans. After two hours of walking, the Captain calls for a halt to allow his tired men some rest. He takes Holtzmann to one side. He discovers that Holtzmann shares his suspicions that Hans is leading them in circles. Frederickson decides to challenge the swarthy huntsman. As Hans walks across the clearing, Holztmann sees a blade over his Captain's shoulder catch the moonlight, he pushes his Captain to one side as a knife flashes between the trees and strikes Hans in the throat.

The soldiers leap to their feet, muskets levelled, as a huge man strides into the clearing followed by a group of brightly dressed men and women. One of the young men pulls the knife from the throat of the very dead huntsman, wipes it in the grass and returns it to a bandolier filled with similar blades.

The big man introduces himself as Beshaley. He explains that they had been tracking a similar disappearance. Beshaley's youngest daughter Drina had been taken from their camp that morning. They had gone to Freidorf to ask for help. Pausing to spit on the corpse, he explains that Hans the hunter made the same offer as he had done to the soldiers and now they were lost in the forest after he had deserted them.

Beshaley's men have managed to track the man who took the Drina to a nearby dell where she appeared to be guarded by just one man with a pack of dogs. They were readying themselves to attack when they heard someone else approach. It was another man with another young girl. The description matches that of Alicia.

Frederickson and Holtzmann agree to join forces with the gypsies and Beshaley leads them to the dell where the girls are being held captive. The girls are lightly defended by two men and their dogs but as the full moon appears between the clouds, the Officers are astonished to see the two men bear their chests, raise their faces to the sky and howl like wild beasts. The men seem to change shape and the once passive dogs now appear to grow in size and they join in their master’s song.

"Werewolves", gasps Beshaley. The men withdraw from the edge of the dell. It would appear that the villagers are offering up strangers as sacrifices to the forest in preference to their own children. The gypsies explain the legends of the werewolves and the fact that only silver weapons can kill them. The gypsies have a number of silver edged knives. The disbelieving Frederickson and Holtzmann have silver decorations on their sword blades.

As more howls sound in the distance, they draw up a plan to attack the dell, rescue the girls and then find their way back to Freidorf where they will hold out until dawn.


A costly game for the werewolves who were down to their last couple of figures, but they did get the girls away. That sets us up nicely for a sequel.

As it was a large game with two players on each side, we allowed each player a turnover before play passes to the other side. 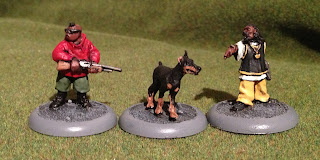 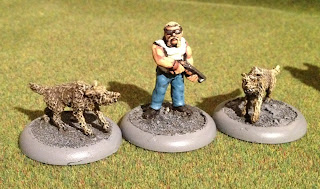 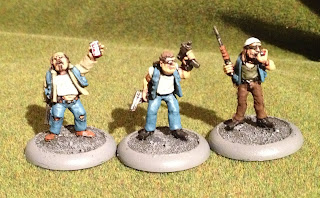 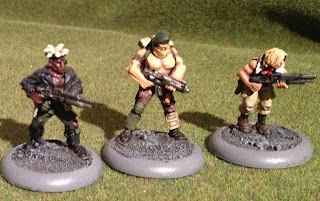 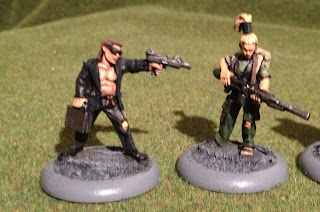 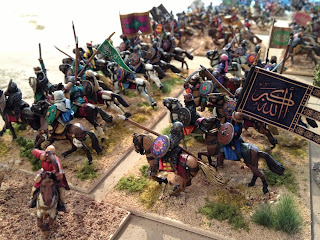 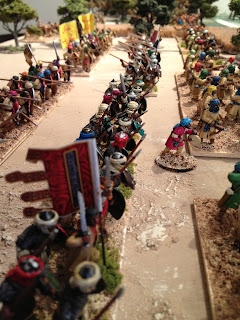 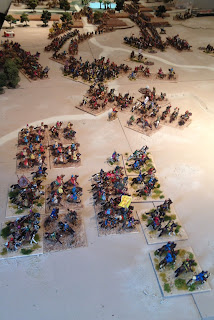 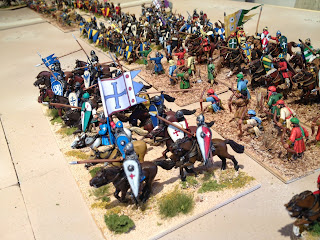 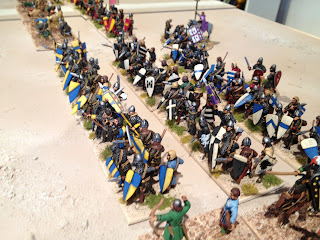 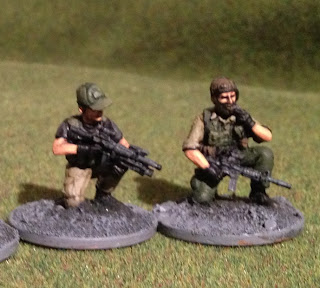 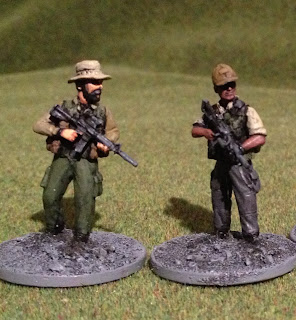 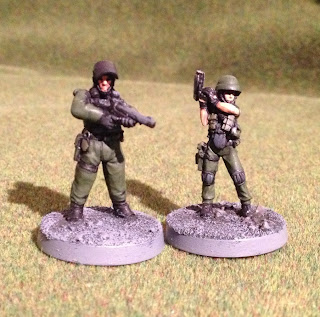 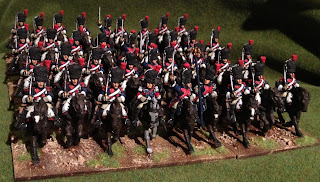 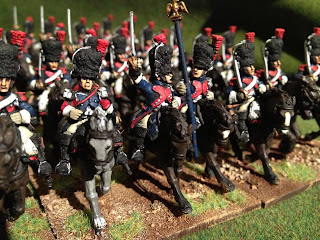 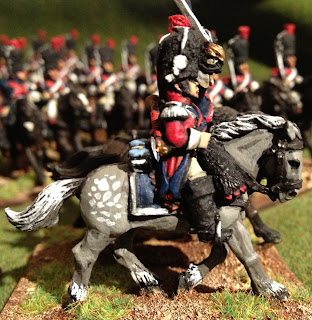 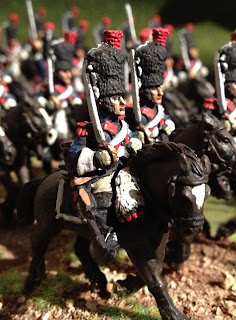 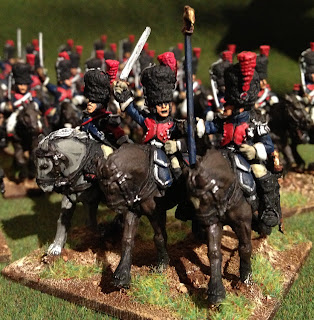